Back to all posts

Hey all! We are gearing up to enter the studio in two weeks to record the new album Might Be The Rain. The eight-song LP will be released in early 2014, but in the meantime, make sure you sign up for the mailing list - you'll get all kinds of announcements and news, in-studio photos and videos, release dates for the first single and music video, and a whole bunch of other goodies like free downloads of new tracks! Keep your eyes peeled for more updates in the next few weeks! 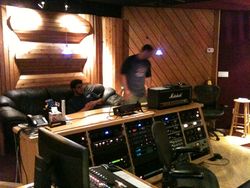