Back to all posts

The problem with music today

Take a look at this picture. 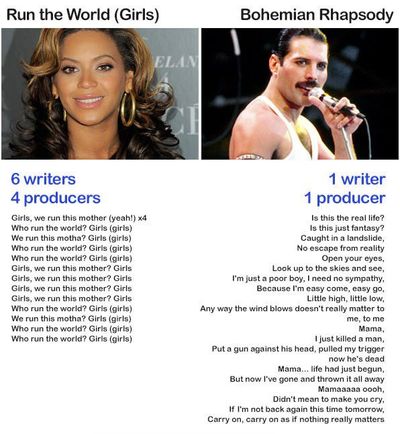 Sure, it elicits a chuckle, but to musicians like myself, it also invokes aggravation and disbelief. The music industry has morphed and devolved (note I didn't say "evolved" because that implies positive growth) into what amounts to a cesspool of self-absorbed self-important yet totally talentless and idiotic "artists" who can't make a bowel movement without someone else planning it for them down to the letter. It used to be rich with talent - Queen, Led Zeppelin, The Beatles, CCR, the list goes on. But over the last decade or so, it has shifted to consist of almost exclusively plastic, brain-dead pop artists who can't play an instrument, can't write music, and can't sing without the help of auto-tune or just flat out lip-syncing (Yeah, Britney, everyone knows and yet they still pay to come see your concerts.)

I've independently funded, written, recorded, and promoted three albums in the last five years. No team of writers and producers, no major label funding, no marketing and PR gurus. Just a grassroots approach, and I know countless other talented indie artists doing the same. I have notebooks filled with songs I've written in the 12 years I've been writing music, I have my BA in journalism and my MA in writing. And yet Beyonce and countless other hacks - individuals lacking enough talent to move them past the classification of "mediocre" at absolute best - are hailed as geniuses. They ask $100+ per ticket to their concerts. They're making millions of dollars, selling millions of albums, and really believe they are deserving and mega-talented. And we allow this to happen?

Case in point, Kanye West. Consistently and annoyingly praised as a lyrical genius. Let's take a look at some of his genius lyrics.

- Don't try to treat me like I ain't famous, my apologies, are you into astrology cos I'm tryin' to make it to Uranus

- In a French-ass restaurant, hurry up with my damn croissants

Pathetically, the list goes on. Kanye West is a dimwitted egomaniac who has received way more than he has ever deserved. But he believes his own hype. And by not standing up and demanding better, not calling a spade a spade and saying "No thanks, give me something with some more substance,", the general population has afforded him the ability to believe he is head and shoulders above everyone else.

The question is, what are you going to do about it? That's right, I'm asking YOU. Because if you're reading this, then you are obviously surfing the internet for music. And that means you have the power to choose. We're here, there are plenty of us indie artists writing, recording, performing, and working our tails off to get our music out there for you guys to hear. Help us. Support us. Give us your time and love and we will pay you guys back tenfold. Give my music a listen. Maybe it won't be your cup of tea, but maybe you'll know someone who would dig it. Maybe you'll keep poking around and find someone else that you really love. But make a choice to ignore the brain-dead mainstream crap, and dive into our world. You might just be surprised by what we have to offer.